We are SO tired.


We drove the three hour journey from Lublin back to Warsaw today, we then rushed to the train station and dumped our RIDONCULOUSLY heavy bags in a locker, THEN we rushed to the headquarters of the Warsaw ghetto fighters to reshoot some footage and then we had a meeting with our assistant(!) Vicky to discuss the narrative and story of our documentary. It has been the busiest day EVER! 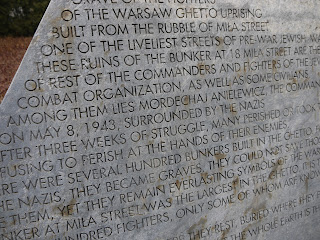 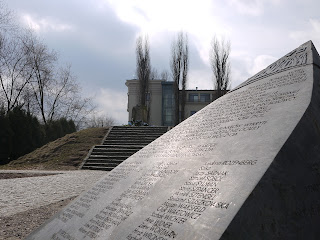 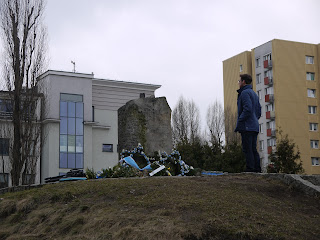 After an interesting chat with Vicky about which way our project was going we visited The Jewish Historical Institute which houses an amazing, interesting and moving exhibition on the Holocaust and the specifically the Warsaw Ghetto. We were totally stunned to see pictures of bodies being thrown into ditches at a mass grave that we filmed at just last week, we were overcome with emotion. We also saw the faces and names of the incredibly inspirational ghetto uprisers. The Institute is named after Emanuel Ringelblum, a philosopher and historian who experienced the Warsaw ghetto and had the amazing foresight to gather documents and testimonies detailing the crimes of the Nazis. He buried his information in three milk cans around the ghetto, only two have been found today.

Warsaw is such an interesting place, the history is so rich and its story of the Holocaust is so tragic. We have learn a lot spending time there and also from Vicky, so we want to thank her for that!
After a FOUR HOUR train journey (that makes SEVEN hours of travelling today people!) we are now in our lovely, little, stripey room in Krakow and we are going to relax. Tomorrow, is the first of our interviews, we are interviewing the Director of the Galicia Museum (a photography museum dedicated to photographing sites of former Jewish life in the Galicia region (modern day south-eastern Poland and south western Ukraine)) and Righteous Among the Nations, a Polish person who saved the lives of Jewish people during the Holocaust.

We can't wait to share with you what we learn.
xx
Posted by From Yesterday, For Tomorrow. at 13:23