We navigated our way to a little French boulangerie for brunch and we burst in singing 'Bonjour, good day, how is your family?' - our server did not understand the Beauty and the Beast reference so it was actually quite uncomfortable. We appeased him by ordering some mediocre faux French food.


We then made our way to the Ukrainian Centre for Holocaust Studies to meet Dr. Anatolii Podolskyi, the Director of the centre and Vitalii Bobrv, the Coordinator for Educational Projects. Before we met them we got lost in the building (surprise, bloody surprise) but we intrepid explorered our way to them, finally. They were extremely interesting. This Centre is an NGO that has achieved a huge amount in only ten years with a very small team of dedicated employees. They work with teachers, students, foreign organisations to deliver (much like we aim to do) education regarding human rights, tolerance and Holocaust history. They work with Holocaust organisations such as Yad Vashem (Israeli Holocaust memorial museum) and different embassies around the world. Their current project is working with the Swiss Embassy to teach about racism in football for the upcoming Euro 2012. They are amazing and really inspiring in terms of what can be done by not many people.


After we left the Centre, we then got lost (AGAIN!) but we stumbled upon (well it was kind of massive so it didn't really take us by surprise) the memorial for soldiers who died in the Second World War. It was VERY Soviet, with huge imposing statues and rousing Russian music blaring out. It felt like we had taken a wrong turn and ended up in Stalin's Moscow. It is interesting though the way that different countries represent themselves. 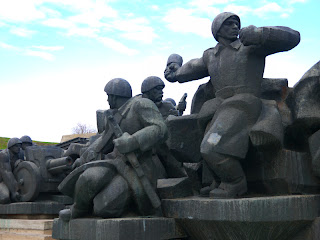 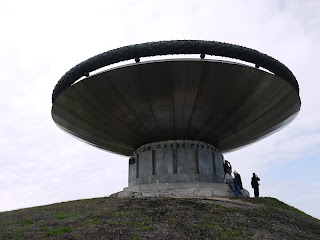 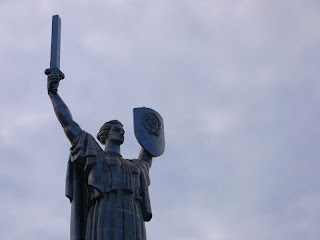 After getting lost again (we aren't even exagerating, Ukraine has been the most confusing country EVER) we had to get a taxi to the Central Synagogue. We met the lovely Elena Kushnir. Elena works for the Jewish community organising events, running the website and controlling the PR. She was very interesting and we talked a lot about her life in Ukraine and if she feels she is a victim of anti-Semitism. Surprisingly (for us) she said that she didn't, so it just goes to show that not every minority here feels threatened. Elena made some very interesting points about people needing to move on from the Holocaust whilst still remembering it. We definitely agree with this but we can only move forward through education.
We have to prepare for tomorrow now, we are visiting Babi-Yar where 33,771 people were shot into a ravine in just two days. That is an unimaginable figure. It is the largest example of the 'Holocaust by Bullets' in Ukraine, we will discuss more about this tomorrow. We are nervous about going, it is one of the most difficult things about the Holocaust to deal with; that people waited around for hours and hours hearing and seeing their loved ones being shot before being lined up or made to lie on the bodies of their friends before being shot themselves.

We just can't imagine how the human body can cope with that much terror.
Posted by From Yesterday, For Tomorrow. at 10:27