Odessa is very interesting and very pretty!
After checking into the hotel we went out to get some lunch and we got lost. Navigating your way around a city when you are unable to recognise any letters other than the ones that are in your name is fairly hard actually. Who knew?! 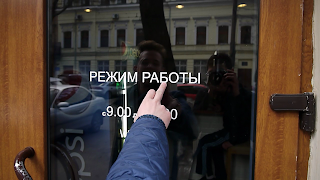 After lunch we got lost again trying to find our way to the JCC (Jewish Community Centre), eventually (after about an hour of walking - hey, at least we got to see Odessa!) we arrived and were met by the lovely and super interesting Jenny Spektor! As we said earlier, Jenny is the assistant at the Migdal JCC, and she has been kind enough to set us up with interviews over the next few days. We chatted with Jenny about what it means to be Jewish today in Ukraine. She explained that everywhere is different but there is definitely anti-Jewish feeling here, as we said yesterday every time there is an election a candidate is accused of being Jewish to 'smear' them. We also discussed the massacre of five thousand people (of Jewish and Gypsy) descent, they were hanged on one of Odessa's busiest street. 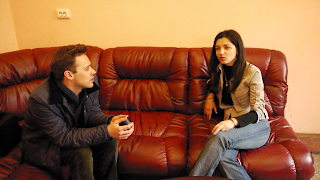 We think that there is a definite distinction to be made between the western Holocaust and the eastern Holocaust.  In general, the western Holocaust was fairly clean, Jewish people, gay people and other undesirables were rounded up, searched out and transported on trains (either comfortable passenger trains (to keep up the illusion of resettlement) or in cattle cars) to Poland where they were murdered in camps specifically created to kill people, their bodies were then buried on burnt, and that was the end of the process. In the east (Romania, Ukraine, Russia etc.), generally, the process was conducted out in the open, the local populations were involved in denouncing 'undesirables' and sometimes joined in the beatings. People being deported to camps in Transnistria or being shot in ditches were forced to walk large distances in public to their destination.

These distinctions are important to make, not just for historical accuracy but to understand the psychology behind the Holocaust. To really learn from this period of human history we need to fully know the ways in which it was conducted so we can fathom how men and women can act so badly towards one another. How did almost entire populations turn against people that they had grown up with, that they had gone to school with? We don't really know but we know that this is the key to making changes to the way we act in the world.
Posted by From Yesterday, For Tomorrow. at 11:08