So yesterday we began the editing process for the documentary. It is extremely exciting seeing it all come together! Last night we created the 50 second introduction sequence which took us two hours! This is going to be a LONG process.


As we are putting all this together and re-watching our footage, we couldn't help but wonder, how could anyone deny the Holocaust?


Although all sane, non racist people know that the Holocaust took place and that the Nazis, using the cruelest methods possible, attempted to destroy many different groups of people. Sadly, there are a lot of non-sane, racist people in the world and Holocaust denial is fast becoming a major problem.


We should probably define what Holocaust denial is. It is often not actually the complete denial of Nazi prejudice. Deniers would probably argue that it was more accurate to describe it as Holocaust revision. Revisionists argue that different aspects of the Holocaust (such as the gas chambers) were made up by certain groups (such as Jewish people) to further their own interests.

It first began with the Nazis who attempted to cover up their crimes and deny the fact that they had wiped millions of people off the face of the earth. Then Americans began to deny it to argue against American intervention in the Second World War. Denial also grew in Europe (where anti-Semitism and other types of prejudice, propagated by the Nazis, has always flourished). Many Arabic states (such as Iran, who held a Holocaust denial cartoon competition) also deny elements of the Holocaust ever happened, despite playing a role in it themselves.

There are two main themes that Holocaust deniers work by, they are:
http://www.youtube.com/watch?v=k6C9BuXe2RM

Although to us, these arguments are ridiculous. Many people would agree with these lies, but why? We believe that although the deniers would argue that every aspect of history needs revision and that they are just providing a service, they are just bigots. Specifically for Jewish people, if the Holocaust turned out to be a hoax, how would it make them look? Would the world think it was ok that the Jewish people had lied about this enormous tragedy? Of course not, people would be outraged and anti-Semitism would increase a hundred-fold. It is just another (extremely disrespectful way to attack Jewish people). 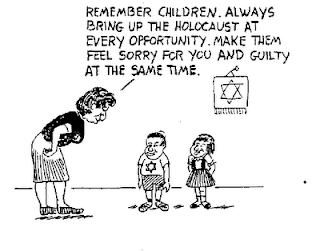 It is also hugely insulting to the memory of the millions of people whose lives were destroyed. Aren't deniers killing them twice? Certain states, such as Germany and Austria, feel that way and have banned Holocaust denial. David Irving, an infamous denier from the UK was imprisoned due to these laws.


Holocaust denial is a real problem that needs to be dealt with but how, is the tricky issue. We believe that we should not engage them in debate. To do so would be to acknowledge that their lies are a legitimate 'other side' of the argument. There is no 'other side', there is no argument. What we must do is just make sure that our voices shout the loudest and that we continue educating people, both to learn from the past but also to know the past. We can't kill these people twice.
Posted by From Yesterday, For Tomorrow. at 02:48