Things are moving along nicely at FYFT central, and this week is no exception!

Yesterday we finalised our plans for another trip to Poland from 29th September - 6th October - intended as further research on the Death Camps we tell the stories of in our resources.  As part of the trip we hope to give a few presentations, and maybe even appear at a school - fingers crossed everything goes according to plan!

Today, We are scooting down south to Durham to film another testimony that is vital to add perspective to our resources. We've been lucky enough to secure an interview with Rabbi Harry Jacobi, an evacuee of Nazi Germany during WWII. He is one out of thousands of children brought to the UK as part of the Kindertransport - we're delighted to have the opportunity to record his story, as the testimonies of those who experienced persecution and escaped are not always given the attention they deserve, but are crucial to help understand the devastation that was inflicted by prejudice.

Finally, on Wednesday evening we've been invited to an event organised by a charity we whole-heartedly champion; Facing History & Ourselves;The Murder of Stephen Lawrence: Learning From a Milestone in British Race Relations. British citizens among us will be aware of 18 year old Stephen's story, but for those who are not familiar, he was a victim of a brutal hate-crime in April 1993; whilst waiting for a bus in South-East London, he was subject to a racist attack which ended his life. Dr. Doreen Lawrence OBE, his mother, and Razia Iqbal from the BBC will be appearing at the evening; if any of you live in London, it's sure to be a very moving and insightful evening.

Thanks,
Ben
Posted by From Yesterday, For Tomorrow. at 02:02 No comments: Links to this post

Between August 6th - 9th FYFT is going to be presenting our educational resources at Habonim-Dror's Sayarim camp!

Sayarim is a 2 week residential camp in Amsterdam where the participants (from the UK), aged about 15, spend two weeks learning about the Holocaust (so it is obviously a natural fit for us).

You may be asking why a camp for young people would be centred on the Holocaust? Well, Habonim-Dror's history is intertwined with the Holocaust. Habonim and Dror used to be two separate youth movements that merged in 1982. Habonim was founded in the UK in 1929, and eventually spread to many English speaking countries. Its ideology was focused on being culturally Jewish, Zionist (for the creation of a Jewish state in the land of Israel) and Socialist.

Dror was founded in Poland in 1915 and focused on Zionism within Poland. During the Holocaust, members of Dror bravely fought during the Warsaw Ghetto Uprising, where Jewish prisoners in the Ghetto courageously stood up to the Nazis and fought back. This is an incredible link between an active youth movement and Holocaust history. 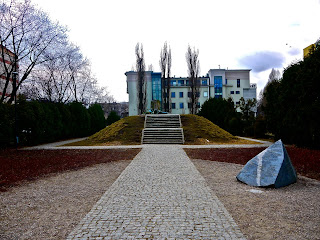 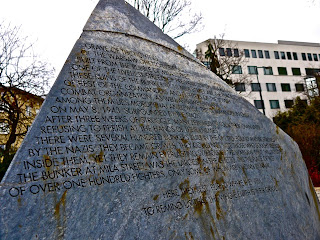 Memorial stone at  Miła 18, the headqaurters of the Warsaw Ghetto Uprising 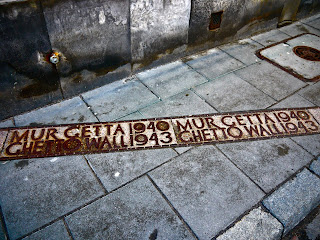 The memorial marking a boundary of the Warsaw Ghetto

We will be leading FYFT programmes over two days, and for the first time other leaders/teachers will be running our programmes. This is a fantastic opportunity for us to spread the messages of FYFT; increasing awareness of what are doing and why we are doing it. It will also be really great that we will be able to get some more practise leading before we start going into schools in the UK.

Whilst we are in Amsterdam, we'll of course take the opportunity to visit Anne Frank's house and other key sites. The Dutch Jewish community suffered huge losses (before the war The Netherlands had a population of 140,000 Jewish people, after the war only 30,000 Jewish people remained alive.)

We are so excited about working with Habonim-Dror and visiting Amsterdam, we hope to have many amazing and interesting things to report when we get back!

Thanks,
Ben
Posted by From Yesterday, For Tomorrow. at 04:41 No comments: Links to this post