Hannah here, blogging in place of the rest of the team who are taking a well earned break in Israel this month! Now that I've left school and I'm enjoying an exceptionally long summer, I'll be using some of that time to work alongside Ben, Grant and Janine. For the moment, that involves writing about an issue that I (and the rest of the FYFTeam) feel very strongly about, but feel doesn't receive the sort of attention it not only deserves, but absolutely needs; feminism.

The feminist movement can be defined as a series of campaigns to reform a number of issues regarding the position of women in society. What started out as a movement to eradicate legal inequalities between men and women has grown into something much bigger, addressing a variety of issues; from the gender pay gap and the Glass Ceiling, to laws that regulate a woman's body, to the way women are portrayed in the media, to rape culture, victim blaming, 'slut' shaming, violence against women and countless other topics. So when I am told that "we don't need feminism any more" or "stop being such a Feminazi" or I hear/see people reducing the feminist movement to just a small group of angry women who simply hate men, it makes me want to write blogs like this (amongst other things...). The word 'feminist' has almost become a slur in recent years. When I tell someone I am a feminist, I am all too often met with disapproving looks or sighs of contempt - from both men and women. As a result, some people feel ashamed to call themselves a feminist (which really sucks). Whilst these issues have a multitude of causes and a long, complex history behind them, I personally believe that one of the main problems is simply a lack of knowledge of what feminism is actually out to achieve.

There is a common misconception that feminism is "anti-men". This belief is potentially quite damaging as it harms the reputation of the movement, turning it into a joke or something to be avoided. "Why should women get special treatment?! That's not true equality!" These views are what stem from this misunderstanding of the movement. Feminism does not seek to give special treatment or priority to women - it aims to achieve equality between men and women. Throughout history, women have had limitations placed upon them, purely on the basis of their gender. Yes, any gender can experience oppression, but the fact remains that it is primarily women who do so - to say that focusing on the oppression of women is not "true equality" assumes there is an initial level playing field between men and women, which we all know is not the case. On top of this, many of the issues that are considered to be male oppression can actually be resolved by feminism. Take this example - "males are not taken seriously when they report violence from a female partner". Whilst this can be true, this view stems from the idea that women are inferior to men, and that to experience abuse at the hand of a women is laughable (for the record, of course any kind of domestic violence is wrong. But I'm sure you knew that already.) Feminism looks to change this view of women, and in doing so it will help to remove this issue. Feminism does not exist to create a world just for women, it only wants to even out the imbalances between men and women in society - now what's so terrible about that?

"That's all very well, but how do you plan on solving the problem? How do you change something that has existed for decades, centuries even?" Well, we're working on it. And it's going to take quite a few of us to make it happen. However, the good news is that it's totally achievable! As it is with many other similar issues, the solution lies in education. If we can teach people from an early age about equality, what it means and how we can make it happen, then we make a lot of progress towards eradicating misogyny (along with a bunch of other uncool things) from our society. This is our ultimate goal, to make a change in the world through education by providing our own innovative resources to help combat prejudices such as this, for good.

So the next time you meet someone who seems confused by your motives as a feminist (and I hope you can call yourself that with pride now) you can educate them and tell them why being a feminist is so great! 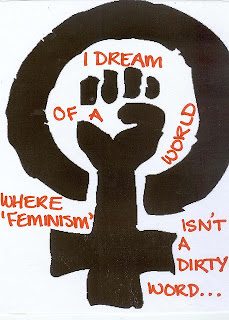 Posted by From Yesterday, For Tomorrow. at 04:10