My name is Grant and this is my first blog for FYFT. I'm in second year of university studying business and I composed the soundtrack for FYFT's first documentary. I also sit on the board of Trustees for FYFT so I get to do lots of cool and interesting things with the FYFTeam! 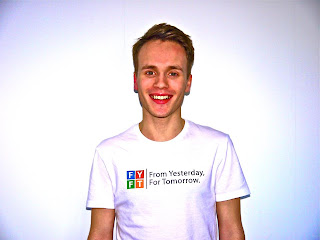 I’ve just returned from a month’s trip to Israel with Ben and Janine and during our trip, we visited Yad Vashem World Center for Holocaust Research, Documentation, Education and Commemoration.  It was such a wonderful museum so I would like to tell you guys about my experiences, thoughts and feelings. 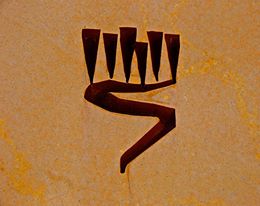 We arrived at the museum very early on Thursday 18th July to meet with Richelle Caplan and Yiftach Meiri from the International School for Holocaust Studies at Yad Vashem.  We discussed FYFT’s approach to Holocaust education and the possibility of attending the prestigious Yad Vashem educators seminar the next year. This is an extremely exciting opportunity for us as we will get to learn from the best Holocaust educators in the world. 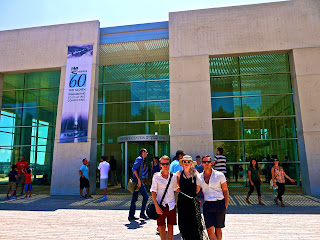 (l-r) Me, Janine and Ben outside Yad Vashem

After our meeting, we swiftly moved off to go and see the museum, so as to avoid the thousands of tourists (it's a VERY busy museum)! We started our tour at the Garden of the Righteous, a garden that is dedicated to the 24,000 non-Jewish people who have had the honour of receiving the title “Righteous Among the Nations” because they risked their lives saving Jewish people during the Holocaust. The garden was filled with plaques showing the names of these people and where they came from. Walking through this beautiful garden, you think of the bravery of these people who risked everything to help their fellow man.  As a non-Jewish person myself, I feel a great amount of respect for the Righteous Among the Nations, and wish there could have been more people like them during the Holocaust (and in situations today).

After visiting the garden, we made our way to the Toblerone shaped building which houses The Holocaust History Museum. The museum has been designed in a very symbolic way. The museum is structured so that as you learn more about the Holocaust you descend down a slight slope, as you get to the section of the museum which teaches you about the death camps the slope is at its lowest point then the slope rises, as you learn about liberation and life after the Holocaust. 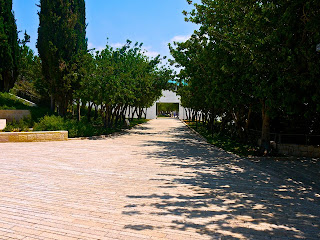 Garden of the Righteous Among the Nation

As you walk into the museum, you are at the far left of the Toblerone shaped building and you are at the start of a descending slope. At the entrance, you are shown that Central & Eastern Europe was the centre of Jewish life before the Holocaust. This is particularly important to know as it is impossible to know what Judaism lost until you know what it had. 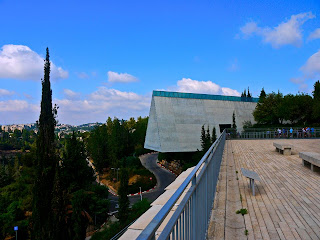 The entrance to The Holocaust History Museum

As you descend the slope, the museum then begins to focus on the rise of the Nazi party, the anti-Jewish propaganda used in Germany at the time, what Nazi officers were doing and at what dates etc.  The museum is extremely detailed with a vast amount of information to take in. Both the information and the content are almost overwhelming, even though I have quite a bit of knowledge on the Holocaust I still can't quite believe what people are capable of.  As you continue, you reach the lowest point of the museum where you learn about the mass murder of Europe's Jewish population – The Einsatzgruppen (mobile executions squads in Eastern Europe) and the death centres of Chelmno, Belzec, Sobibor, Treblinka, Auschwitz-Birkenau and Majdanek. Throughout these very emotionally parts of the museum, there are videos of survivors giving their testimonies. It is vitally important that their stories are heard and the museum pays great tribute to these survivors by ensuring that their testimonies are never forgotten. After this, the slope throughout the museum begins to rise and the museum focuses on liberation and what survivors did after the war. The most emotional part for me here was the room of four million names. This room is a ginormous circular room filled with files of names of the Jewish people who died during the Holocaust. The museum is still researching to try as much as possible to commemorate every victim of the Holocaust.  As the slope continues to rise, the walls on each side of the Toblerone shaped building begin to open, and you come out at the top to the most breath taking view over Jerusalem.  There is something very touching about the symbolism of this climb through the museum. It represents hope for not only the Jewish people, but for mankind a like. It made me reflect on the world, my role in it and the actions and what people can do to make a difference. At that point I felt that I understood, more than ever, why we must not allow prejudice to continue to be a part of our world. 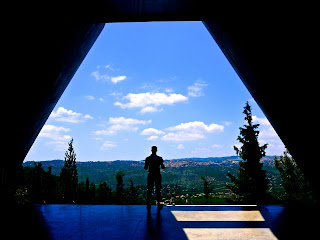 Ben, looking over Jerusalem, at the end of the The Holocaust History Museum

For me, the most amazing thing about Yad Vashem is its ability to make a visitor reflect on their own life.  Its very easy to put a personal attachment to everything you are seeing in the museum, and this is not just the case for Jewish people but for everyone. Yad Vashem is an extremely important place for anyone to visit. Just looking at one testimony from a survivor makes you think: 'how could this have possibly happened?' It makes you want to go into the testimony you're hearing and comfort the survivors, but then you realise that there is very little comfort found after such a horror.  However, there are things we can do today to help these people see that they the crimes committed against them will not be allowed to be repeated.  If we can stand up to persecutors and say no to bigotry we can make sure that something like the Holocaust will never happen again.  And this is why Yad Vashem is important for everyone. It reminds us of what happened and what could still happen today.  I take comfort in the knowledge that Yad Vashem exists, educating thousands of visitors a day on the most horrendous things that can occur when prejudice goes unchecked. 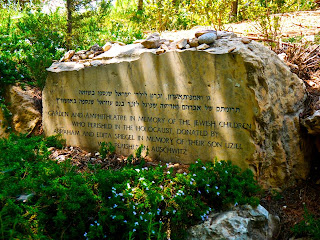 Part of the memorial to the 1.5 million Jewish children that were murdered in the Holocaust

Posted by From Yesterday, For Tomorrow. at 03:06