I had never even heard the name Maya Angelou before the sad news of her passing in April of this year. All of a sudden, images of her face covered every magazine and newspaper I saw; she was hailed as an inspirational figure, a creator of beautiful poetry and literature and an extraordinary human being. I was, of course, intrigued. Why was this the first time I had discovered such a renowned author and poet? As a prospective literature student, I liked to think that I kept myself up to date with everything writer-related. It was largely out of curiosity that I picked up a copy of Angelou’s first memoir, ‘I Know Why the Caged Bird Sings’. 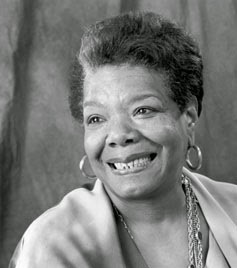 I was instantly pulled into the southern American state of Arkansas, watching a young Maya as she struggled with her identity as a young black girl in an oppressive and racist society. Although she and her brother Bailey lived in relative comfort in the care of their grandmother, they were constantly forced to deal with abusive behaviour at the hands of white inhabitants of Arkansas. The cruelty that I read about so frequently was incredibly shocking; it made it worse to think that such atrocities were being committed a mere eighty years ago. The scene that I found most distressing was one where Maya and her grandmother visited the dentist. Because the only African-American dentists and doctors were 25 miles away, Maya was taken by her grandmother to a practice nearer to home. This practice was run by white dentists, and upon arrival Maya was told that they “do not treat nigra, coloured people”. Although the money given by Maya’s grandmother had kept the dentist’s business from going under, the dentist insisted that he would rather put his hand “in a dog’s mouth” than in Maya’s.

I found this scene appalling, as any other person would – it just didn’t make sense to me that someone could look at another human being in pain and refuse them help. As a white person, it was particularly uncomfortable to read. Although I was not personally responsible for the abuse that Maya and others like her had to face, it upset me to think that I have descended from those who were. Maya’s descriptions of the white people around her really struck me; seeing people like me through her eyes really made me think about how lucky I am to have never experienced racial abuse.

Although Maya starts off as a young, angry girl, furious with the treatment of her community, throughout the course of the book she transforms into a courageous and accomplished young woman. It warms the heart of a reader to learn that Maya becomes the very first black streetcar operator in San Francisco at the age of fifteen – her determination and spirit are incredibly inspiring. Although she grew up in a society where she endured great cruelty and prejudice, Maya Angelou’s legacy was not one of hatred or bitterness but one of love. It is for this reason that I can understand why she is adored and revered throughout the world.


Sadly, racism is not a problem that has been eradicated from modern life. However, we have made great steps forward in the last number of years in combatting racial prejudice around the world. I do not believe that either guilt or bitterness is beneficial to anyone. The sufferings of people in the past should be remembered but not used to apportion blame. We are all human beings with similar aspirations; we all feel pain and joy and anger and love, no matter what colour our skin is or which ancestors we have descended from. To quote Maya Angelou once more, “Perhaps travel cannot prevent bigotry, but by demonstrating that all peoples cry, laugh, eat, worry, and die, it can introduce the idea that if we try and understand each other, we may even become friends.”

- Anna Rickards
Posted by From Yesterday, For Tomorrow. at 02:13